Melodic power metal is something of a rare treat for heavy metal fans in the Western Mass area. The heavy metal genre out here is mostly populated by a litany of thrash and classic metal outfits, like Goblet and Lich King as well as the region’s famous population of Metalcore bands. That rare treat for lovers of epic metal (and that is with a capital E) comes in the form of Thunderforge, a power metal group from East Longmeadow.

If you have been keeping up with the group and going to shows you will know that the band has a good list of songs under their belt; if not, then you might notice that they only have two officially released songs (on their bandcamp) that are available for purchase. No full album release as of yet. What’s the hold up guys?

The two studio songs that are available are “Harbinger” and “Hold On”, and both show off the band’s best aspects. Heavy riffs, catchy verses, and sweeping choruses are in full display in both tracks, but each has enough variety to be unique in their own way.

“Harbinger” brings crushing riffs right away before leading into the chugging verses that move through most of the song, and wisely changes up the script with screeching guitar solos for the finale. “Hold On” takes a slightly lighter tone for the first minute before launching into an inspiring chorus that carries the song into the epic territory that any listener, metal fan or not, can enjoy.

“Hope is not lost, you are right where you belong!” A. Morini belts toward the songs climax. “Hold on!/ Keep your dreams alive!” The effect is admittedly cheesy, fun, and almost impossible not to sing along too.

One ace card that Thunderforge has up their sleeve is the melodic prowess from Jules Conroy. Jules has been playing guitar since 2006, but he also is an avid gamer. He has since been able to combine these two passions together to create his youtube moniker FamilyJules7x, and has been making creative covers of video game music over the past few years. He has gained so much popularity through these metal-tinged game covers that Jules has carried on to play at the video game conventions Twitchcon and PAX. Video game music is known for being rife with melody, and that does wonders to the song writing that Jules partakes in with the rest of the band.

Power metal has always had a focus on the vocals and fortunately Thunderforge is able to bring that with colors. Morini and “Siege” Morini both are able to intertwine their riffs and vocal melodies together to create a solid backbone for each song, making sure that the musicianship is there to keep the songs fresh and not bogged down with too much backing vocals or overkill on the “epic” sections.

Thunderforge might not have any official release as of yet, but keep an ear out for them. They are still highly active in the area and promise to be releasing an EP sometime in the future. 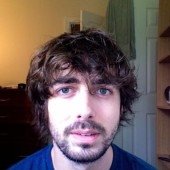 My name is Niall and I am a Journalism major from Umass Amherst. I love music like many people do but have decided to pursue that love into writing and learning as much as I can about the art form. My favorite genres are Electronic and Heavy Metal but any type of music can strike a chord with me if it is creative, emotional, and fun enough. Luckily I am blessed to live in such a great area like the Pioneer Valley where it truly feel like there is a never ending stream of fantastic bands and acts